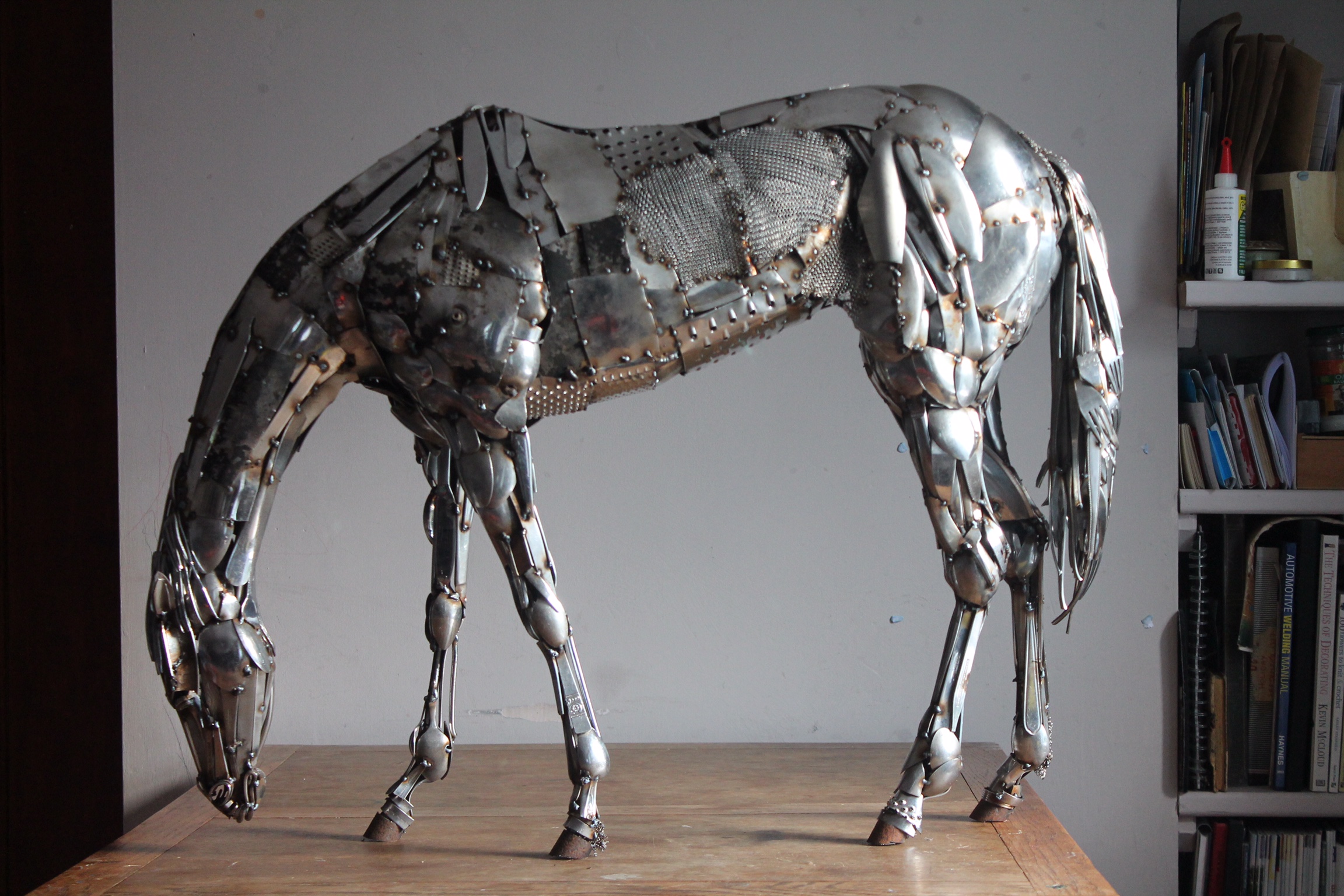 Ahead of the exhibition Art Without Borders, by Living Art Gallery in Hungerford, West Berkshire, we asked founder Justin Cook’s artists several questions.

You juxtapose the theme of the natural with the artificial by sculpting life-like animals using man-made materials. Can you expand upon how this relates to the Land Art movement? How did you engage with this concept and what does it represent to you?

In my journey as an artist, the pieces I am making now are a natural progression to where I have been. The use of reclaimed materials in my work has grown from a love of found objects.This grew out of making art in the land and finding wonderful fragments of man-made things and collecting them as though I were a future archaeologist. I think my interest in Land Art was a reaction to the confinement and claustrophobia I had felt trying to be an artist in England, where people wanted to judge me based on my success, or lack of it at the time.
My interest in Land Art flourished when I moved to Wales – I dug earth and altered the land, wove hedges and shaped timber. I played with water, clay and sand.
It represented a freedom I hadn’t known – Inwardly and outwardly.

You studied fine art at the Cheltenham School of Fine Art. Do you think contemporary artists are, or will actively re-engage with art of the past? Do you believe in Danto’s (or Fukuyama’s) ‘After the End of Art’ narrative that demands a new set of criteria and criticism must be established to judge and record the art of this century?

I think that many contemporary artists are increasingly referencing the art of the past but that they are perhaps engaging with it less and less as the context is lost. Because of the effect of these ever-decreasing cycles, I agree with Danto and Fukuyama in the respect that we are entering a new and definitive era for art. I find this a freeing and exciting prospect. Although, the need to continually de-mark and categorise art, I have found quite perplexing and unnecessary as part of my experience.Should we just enjoy this new space before we make rules?

You are participating in the group show ‘Art Without Borders’. As the only British artist part of the exhibit, do you think art can effectively be used as soft political power to bridge cultures? Can we – through art – build a more enlightened and tolerant society?

My upbringing, education and opportunities could be seen as ideal. I had, unarguably, the potential to be comfortable and secure in an affluent area. I left Wiltshire over ten years ago feeling alienated and disaffected. I moved away from there in search of otherness. A process, in which, art and culture have been powerful conduits for me.
I now live in Wales, with it’s own distinct culture and a language that I do not speak – I am an immigrant. All along my journey so far I have seen that art has the power to bridge cultures and bring people together, but it is no magic wand. I think that people need to move away from centralised media culture first to find the healing, nourishing power of authentic art and culture for themselves. I think we first have to seek enlightenment and tolerance and then art has a role to play, yes.

In this digital age, information can be disseminated at a lightening speed. What responsibility does art – and artists – have to the public?

Essentially my stance is one of anti – censorship. Art is just a language like music or comedy, which should be a place where, within a gallery context you can say what you want. However, given the possible reach of digital communication and the frequent (deliberate) misinterpretation and outrage of mainstream media, I think if artists seek to be provocative, they have a responsibility to know why. Just offending people is a cheap trick…

What advice would you give to emerging artists (and those who do not currently have a commercial platform)?

As an artist who fell through the cracks in the usual channels many times my advice would mainly be to artists who are struggling to succeed through the educational system.
I have done all kinds of work, which, because of the mind I approached them with have made me stronger and more adaptable as an artist. Don’t give up – if you haven’t been selected by the system as a likely achiever, you’re different and that’s a more powerful thing in my world. It will only make you stronger as an artist to make things (with full commitment) that nobody else cares about.

Do it for your own growth. Success doesn’t bring validation – just another set of people who are harder to please.