London/Sochi – Asif Khan has announced details of his MegaFaces project, a pavilion at the entrance of the Sochi Olympic Park commissioned by MegaFon, one of the largest Russian telecoms companies and General Partner of the Sochi 2014 Winter Olympics. 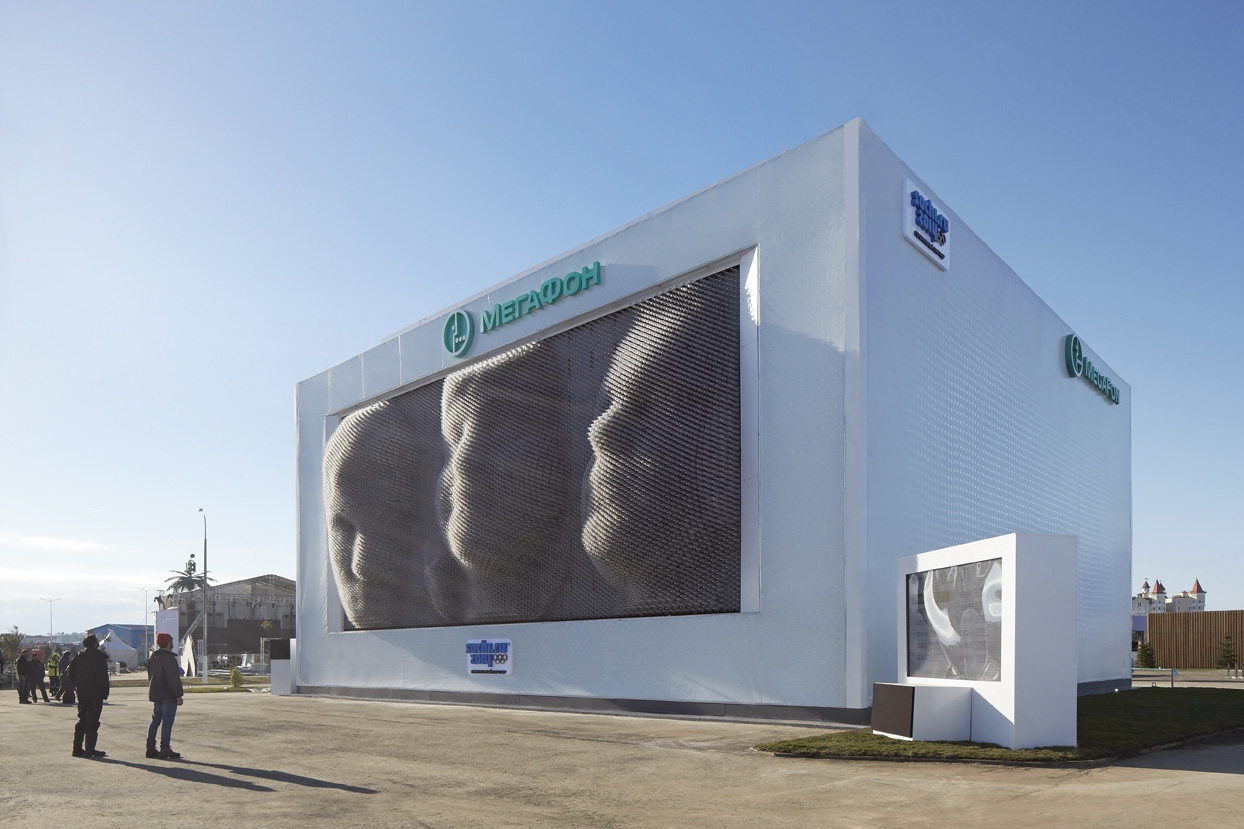 The pavilion, a 2,000 m2 cube, features a kinetic façade created by Khan in close collaboration with Basel-based engineers iart that can transform in three dimensions to recreate the faces of visitors to the building. Facial impressions will be relayed via 3D scans made in photo booths installed within the building. Formed by 11,000 actuators, the resultant portraits will appear on the side of the building, three at a time, at 8 metres tall. This feature of the building has been likened to a digital, architectural Mount Rushmore. The faces to emerge from the side of the pavilion will be magnified at a scale of 3,500 times the original.

‘For thousands of years people have used portraiture to record their history on the landscape, buildings and through public art. I’m inspired by the way the world is changing around us and how architecture can respond to it. “Selfies”,“emoticons”, “Facebook” and “FaceTime” have become universal shorthand for communicating in the digital age. My instinct was to try and harness that immediacy in the form of sculpture; to turn the everyday moment into something epic. I’ve been thinking of this as a kind of digital platform to express emotion, at the scale of architecture.’

Asif Khan’s architecture has from the beginning employed an investigative language that explores transformative structures. The studio’s first ever project, West Beach Cafe, is also a cube which, via the manipulation of one of its façades, transforms entirely from a closed to an open space. ‘Each of the 11,000 actuators carries at its tip a translucent sphere that contains an RGB-LED light. The actuators are connected in a bidirectional system which makes it possible to control each one individually, and at the same time also report back its exact position to the system. Each actuator acts as one pixel within the entire façade and can be extended by up to two meters as part of a three-dimensional shape or change colour as part of an image or video that is simultaneously displayed on the façade.’

‘The challenge in our case was the development of a system that would meet Asif’s requirements of the project in relation to speed, usability and image quality. The process will be as fast and simple as using a commercial photo booth.’

‘The Sochi Olympic motto of our company is “Create your own Olympic history”. These games are our national heritage and this project allows everyone to leave a mark, to make a contribution to this legacy. Nothing expresses a person’s individuality as much as the face, and the faces on the architectural canvas of this building will project a fascinating portrait of Russian sports fans and supporters. Our Olympic pavilion is not just a remarkable work of architecture, but an important metaphor for bringing people together”.