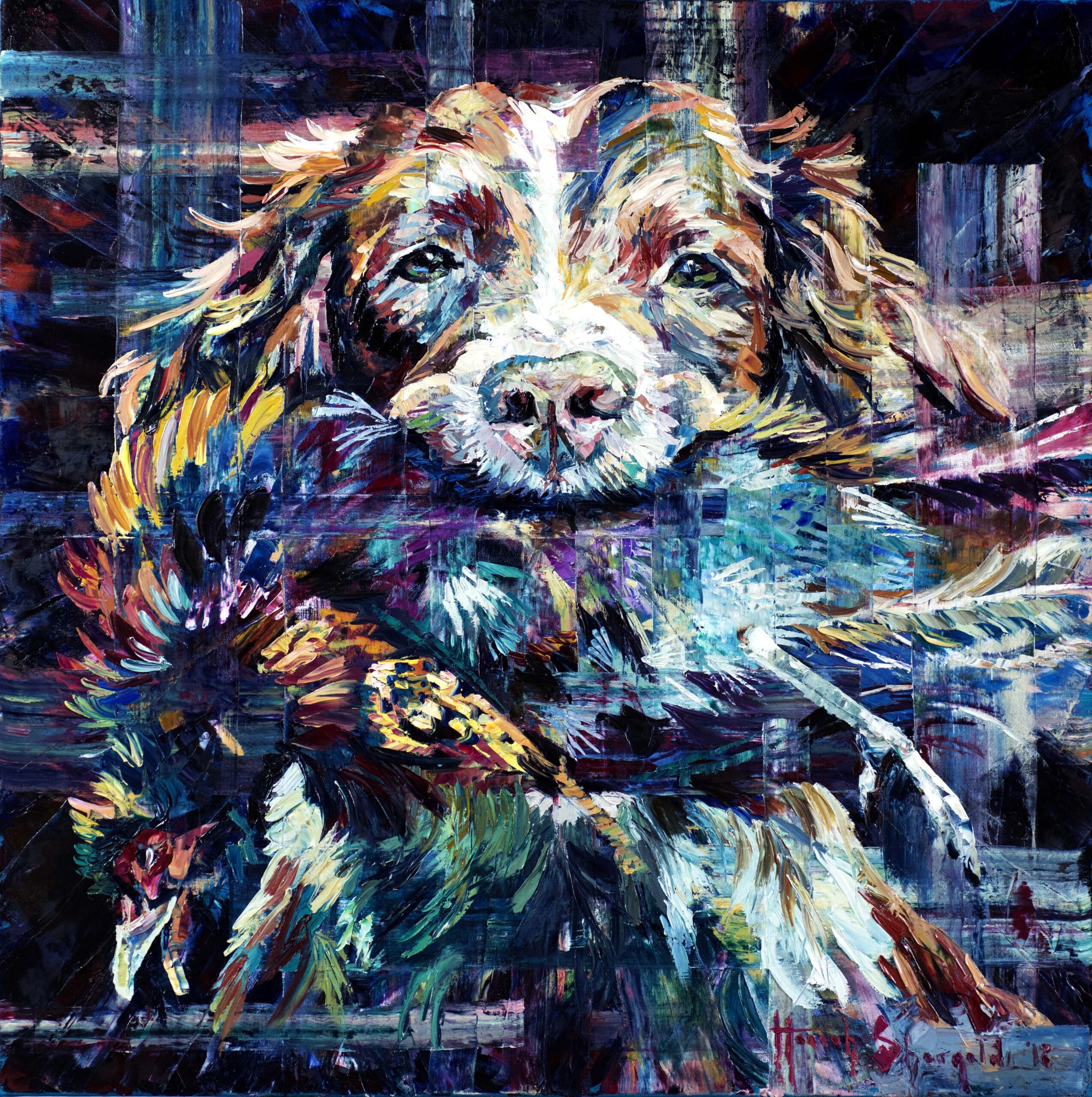 Ahead of her her first solo exhibition in Mayfair at La Galleria, Pall Mall (25th-30th June), we asked artist Hannah Shergold, a former military lynx helicopter pilot, several questions on her upcoming exhibition and how she got involved in the arts.

Can you tell us in your own words about your upcoming exhibition at La Galleria in Mayfair.

Having left the Army only recently (April 18) I decided to make the bold move to prepare a solo Mayfair exhibition.

I booked the space before I had begun to paint the collection and, though some may see this as reckless, I’ve really enjoyed the focus and motivation that has come from working to a deadline. It’s my first body of work that has been painted as a collection rather than as individual paintings and I’m really pleased with how it has come together.

There are a total of 14 works ranging from 60cm square to 180 x 120 cm. These large canvases have allowed me to really express the movement of the animals without being confined by the composition. I love to use really bold marks and colours and the large scale allows me to do this without the paintings become too ‘tight’.

The show will run from the 25th – 30th June 2018 at La Galleria, Pall Mall. There is a private view on the evening of Tuesday 26th June and free tickets can be reserved from my website – www.hannahshergold.com.

Please tell us about your participation in Sky’s portrait artist of the year competition.

In May 2017 I was thrilled to win the Wild Card competition for a place in the heats of Sky Arts Portrait Artist of the Year 2019. The competition was hosted in the National Portrait Gallery – a completely surreal experience – and our sitter was the beautiful Emeli Sandé.

It was such an honour to meet Tai Shan Schierenberg, Kathleen Soriano and Kate Bryan, as well as the hosts Joan Bakewell and the hysterical Frank Skinner. I was genuinely convinced that my painting had not quite hit the mark, so when Kathleen announced that I had won I was completely stunned and a little emotional. It’s a show that I completely adore and have so much admiration for because the judges are so focused on the quality of the artwork.

Filming takes place over the summer this year and the programme will be aired in January 2019.

How much of your work is inspired by/drawn from your experience in the Army?

Much as the subject matter has now moved away from Army themes it was my deployment to Kenya that got me back into drawing. I spent a lot of time on standby duty to fly helicopter medical evacuations so there was plenty of time to kill. Where some read books or play video games – I paint!

I began with drawings of my military surroundings – the camp, the soldiers, the vehicles and aircraft – but moving from pen and ink to watercolour lent itself more to the natural world and I started to paint more and more wildlife.

Do you produce commissioned work? If yes, can you tell us about your favourite one?

I have steered away from commission work in the last year despite there being plenty of demand for portraits of both animals and humans. I have really wanted to develop the style and to do this has required a level of freedom to experiment that I do not have with commissions.

This is a stark change from my sculpture days (pre-Army) when 100% of my work was on commission. My favourite was the Charging Black Rhino, a commission for the 1 st (UK) Armoured Division in Germany. I was so pleased with the energy and movement that I managed to get into the piece – the animal really has strength and purpose.

After the show I will begin to take on occasional commissions but I will continually monitor how this is affecting my style. Staying true to the work will always be more important to me than the money.

Which is your favourite work to date and can you tell us the story behind it? My favourite work to date has got to be a tie between “The Obedient Spaniel” and “The Hunt”.

The first is, in theory, a brown and white dog holding a brown bird, but there is not a speck of brown paint in it. It is full of colour and energy despite a very still and calm pose and I feel I’ve managed to capture that willing look in the eyes of a good working dog: “How can I please you?”.

“The Hunt”, at 180 x 120 cm, is my largest work to date and is a real ode to movement and energy. Horses have always been a passion of mine and it was such a treat to be able to paint them in full flight. I tried a similar piece about a year ago and couldn’t quite achieve the looseness of mark that I was after, but a year of developing the style and I think (I hope!) I’ve nailed it! I would say to anyone with a passion for art: just make the time to practice, practice, practice. If this means working extra hard whilst in a full time job then this is what you must do, but I would always try NOT to follow the money if you can avoid it. It sounds contrary to popular wisdom but if you can develop a style and passion

without being a slave to commissions I think your work will be so much better and people will still want to follow you and invest.

Are you able to share with us any news about your involvement in the Invictus Fundraiser later this year?

I’m absolutely honoured to have been invited to participate in two events this year. The first, taking place on May 31st, is the Tempus Earth Gala for the World Wildlife Fund and the second is the Invictus Games fundraiser on the 29th June. I will paint a canvas on the night (no pressure!) which will be auctioned to raise money for the respective causes.

I’m not yet sure exactly what the paintings will be, but I’m hoping that the guest speakers will sign the work in order to make it even more exclusive and valuable. I am beyond excited to be contributing to these two very worthy, but very different, causes. With 100% of the proceeds going to the charities I really hope that I can raise a significant sum of money for each one.