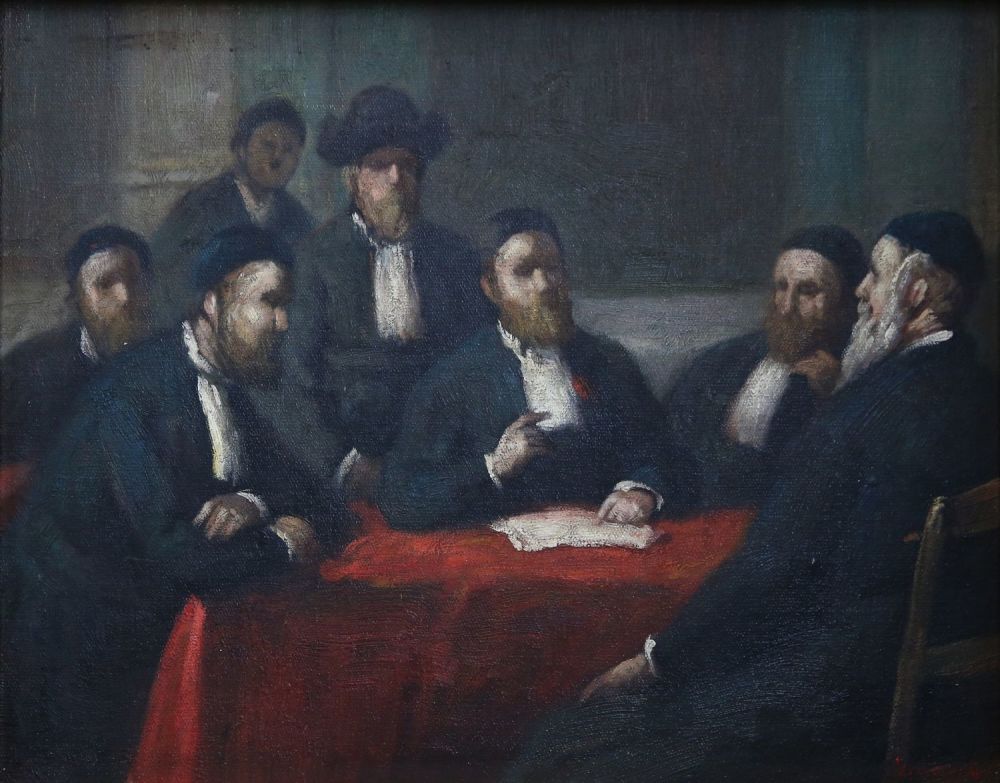 Ahead of tomorrow’s auction of ‘Court House’ by Alfred Wolmark (first half of the twentieth century), we are publishing the story behind the discovery of the art work.

Alfred Wolmark, a post-impressionist painter and a pioneer of the New Movement in Art, was born into a Jewish family in Warsaw, and grew up in Spitalfields, East London, along with other Jewish immigrant émigré families. A lot of his works reference his Jewish identity and faith, focusing on the peaceful elements of his religion (as opposed to the antisemitism and persecution he has experienced).

His paintings are now in many galleries around the world, including the National Portrait Gallery, London, Derby Museum and Art Gallery.

He was just browsing the auction, fishing around for an article of interest. He does it more as a hobby than anything else, and his interests are strictly judaica, with a tendency towards literature and art. So it was that he was browsing the auction, he didn’t expect to see anything exciting, but decided to look it through anyway. One item captured his eyes at the very first moment, his intuition directed him to look into it more…

The caption read, “Jewish figures at a table, oil onto board, bearing a signature Wolmark and inscriptions verso, framed, 43cm x 34.5cm“. He wasn’t sure what this Wolmark signature was all about, but the picture captivated him and he decided immediately to make it his. The auction house certainly does not appreciate the beauty of this picture, he mused, eyeing at the estimate of 100 – 200 pounds, that the auctioneers had granted it. They are in for a shock, he thought, as he put in an absentee bid…

Sure enough, after a couple of days, he received confirmation of his winning bid, and soon the picture was in his hands. Holding it, studying the obviously graceful lines the artist had painted, admiring his new purchase, his attention was then diverted to the back of the antique frame, and the picture framers label which was still there. It read “fine art packers, frame makers, 17 & 18 Nassau Street, Mortimer Street, W.”, and had a code. His memory tickled him at having seen something in the NPG site about 17 & 18 Nassau Street in London, but he couldn’t recall exactly what it was, and decided to look it up.

It turns out this label belonged to the famous James Bourlett art framers, testifying that the legendary framers had dealt with this work of art. In the National Portrait Gallery there are so many works of art framed by this company, that the company has a lengthy listing in the “British picture frame makers” article on the NPG site, with a rich history of framing many important works spanning the years 1850-1991. The business was purchased by Sotheby’s in 1973 (The Times 6 April 1974), and was the vehicle used by Sotheby’s to acquire J.J. Patrickson & Sons Ltd (qv) in 1974 (The Times 20 September 1974). The business was sold by Sotheby’s in 1982 to a group of former employees at a knockdown price (The Times 28 May 1982). It has been owned by Gabrielle Rendell since about 1990.

Having established as much, he realized the work must be of a more valuable nature, and decided to track down the signature “WOLMARK”. Typing “WOLMARK” into Sothebys, he saw to his great surprise the value bracket for Alfred Wolmark judaica art, bracketed comfortably in the five figures. It seems the Judaica pieces of this Jewish artist are exceptionally rare and are strictly confined to the decade after his Europe tour in 1903, hence their high value.

But try as he might, he could not find one picture anywhere that was like the piece he had bought, although Sabbath Afternoon bore a faint resemblance to the style of his piece. Alfred Wolmark was definitely the signatory on this work, that much he had established after comparing signatures, but this work seemed never seen before at auction. His spine tingled with excitement as he realized the ramifications of his discovery: the painting in his hands was obviously lost somewhere, and lay undiscovered perhaps ever since it was made, until now.

The notion of a world-famous artist’s painting being rediscovered has been always a point of interest in the art world, but the idea of discovering a never-before-seen antique piece of art is of exceptional, if not individual interest at large. Coupled with the Judaic value of the picture, which depicts the Jewish Court Room “Beth Din” makes the value of Wolmark, whose Judaic paintings have always been expensive, grow even higher.

He decided to have it sold at auction and let the highest bidder win.  The excitement the piece has engendered in the auction public can be gauged by the swiftness of the first bid. Set at an attractive starting price ($5,000) and armed with a realistic estimate of $10,000 – 15,000, less than six hours had passed since Jerusalem-based Winners Auctions put it up online, when they already received an opening bid via the Bidspirit platform. This auction, slated for the 19/06/18 3:30pm British time, promises to be an exciting, tension-filled one, as art collectors worldwide will compete for the privelege of adding this unique painting to their collection.

An in-depth interview with Dr. Steven Lavine; Part I